Posted by Andreas Bloch under the assistance of Octavian Ganea and Gary Bécigneul on October 15, 2019

So, in Riemannian optimization we’re interested in finding an optimal solution $\vtheta^*$ for our parameters 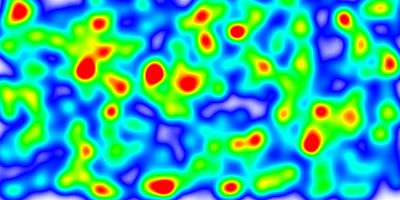 Heatmap of a loss function $\cL$ defined on the Euclidean plane

Heatmap of a loss function $\cL$ defined on a spherical manifold

Similarly as with SGD in Euclidean vector spaces, in Riemannian optimization we want to perform a gradient-based descent on the surface of the manifold. The gradient steps should also be based on the gradients of the loss fuction $\cL$, such that we finally find some parameters $\vtheta^*$ that hopefully lie at a global minimum of the loss.

Indeed, the Euclidean vector space $\R^n$ can be interpreted as a Riemannian manifold $(\R^n, g_{ij})$, known as the Euclidean manifold, with the metric $g_{ij}=\delta_{ij}$. When using our usual SGD to optimize a loss function defined over the Euclidean manifold $\R^n$, we iteratively compute the following gradients and gradient updates on minibatches in order to hopefully converge to an optimal solution:

In both examples we saw that the simple SGD update-rule for Euclidean vector spaces is insufficient to guarantee the validity of the updated parameters. So now the question is, how can we perform valid gradient updates to parameters that are defined on arbitrary Riemannian manifolds? – That’s exactly where Riemannian optimization comes in, which we’ll look at next!

In the “curved” spaces of Riemannian manifolds the gradient updates ideally should follow the “curved” geodesics instead of just following straight lines as done in SGD for parameters on our familiar Euclidean manifold $\bbR^n$. To this end, the seminal work of Bonnabel [2] introduced Riemannian Stochastic Gradient Descent (RSGD) that generalizes SGD to Riemannian manifolds. In what follows I’ll explain and illustrate how this technique works.

Let’s now assume that we have a typical Riemannian optimization problem, e.g., one of the two mentioned previously, where the solution space is given by an arbitrary $d$-dimensional Riemannian manifold $(\cM, g)$ and we’re interested in finding an optimal solution of a loss function $\cL\colon\cM\to\cR$, that is defined for any parameters $\vtheta$ on the Riemannian manifold. Let $\vtheta^{(t)}\in\cM$ denote our current set of parameters at timestep $t$. A gradient-step is then performed through the application of the following three steps:

We’ll now look at these steps in more detail in what follows.

The computation and evaluation of the derivatives $\fpartial{\cL(\vtheta^{(t)})}{\vtheta}$ is usually just performed automatically through the auto-differentiation functionality of our machine learning framework of choice. However, the multiplication with the inverse metric $\vg^{-1}_{\vtheta^{(t)}}$ usually has to be done manually in order to obtain the correct quantity for the gradient $\nabla_{\vtheta}\cL(\vtheta^{(t)})$.

If that should be new to you that we have to multiply the partial derivatives by the inverse of the metric tensor $\vg^{-1}_{\vtheta^{(t)}}$ to obtain the gradient then don’t worry too much about that now. Let me just tell you that, actually, that’s how the gradient is defined in general. The reason you might have never come across this multiplication by the inverse metric tensor is that for the usual Euclidean vector space, with the usual Cartesian coordinate system, the inverse metric tensor $\vg^{-1}$ just simplifies to the identity matrix $\MI$, and is therefore usually omitted for convenience.

The reason behind the multiplication by the inverse metric tensor is that we want the gradient to be a vector that is invariant under the choice of a specific coordinate system. Furthermore, it should satisfy the following two properties that we already know from the gradient in Euclidean vector spaces:

Explaining the reasons behind the multiplication with $\vg^{-1}_{\vtheta^{(t)}}$ in more detail would explode the scope of this blogbost. However, in case you should want to learn more about this, I highly recommend that you have a look at Pavel Grinfield’s valuable lectures on tensor calculus (until Lesson 5a for the gradient), where you can learn the reasons behind the multiplication with the inverse metric tensor in a matter of a few hours.

Since the previously computed gradient $\vh=\nabla_{\vtheta}\cL(\vtheta^{(t)})$ may be lying just somewhere in ambient space, we first have to determine the component of $\vh$ that lies in the tangent space at $\vtheta^{(t)}$. The situation is illustrated in the figure below, where we can see our manifold $\cM$, the gradient $\vh$ lying in the ambient space, and the tangent space $\cT_{\vtheta^{(t)}}\cM$, which represents a first-order approximation of the manifold’s surface around our current parameters $\vtheta^{(t)}$. 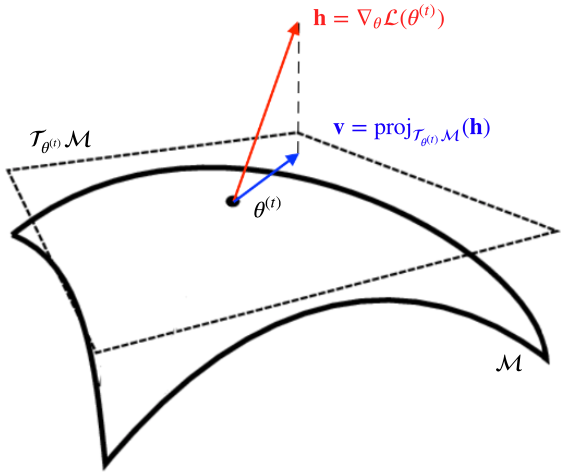 Depending on the chosen representation for the manifold $\cM$ it might even be that the orthogonal projection is not even necessary, e.g., in the case where any tangent space is always equal to the ambient space.

Recall, that the tangent space $\cT_{\vtheta^{(t)}}$ represents a first-order approximation of the manifold’s smooth surface at the point $\vtheta^{(t)}$. Hence, the vector $-\eta_t\vv\in\cT_{\vtheta^{(t)}}$ is in a direct correspondence with the point $\vtheta^{(t+1)}\in\cM$ that we’d like to reach through our gradient update. The mapping which maps tangent vectors to their corresponding points on the manifold is exactly the exponential map. Thus, we may just map $-\eta_t\vv$ to $\vtheta^{(t+1)}$ via the exponential map to perform our gradient update:

The gradient-step is illustrated in the figure below. As one can observe, the exponential map is exactly what makes the parameters stay on the surface and also what forces gradient updates to follow the curved geodesics of the manifold. 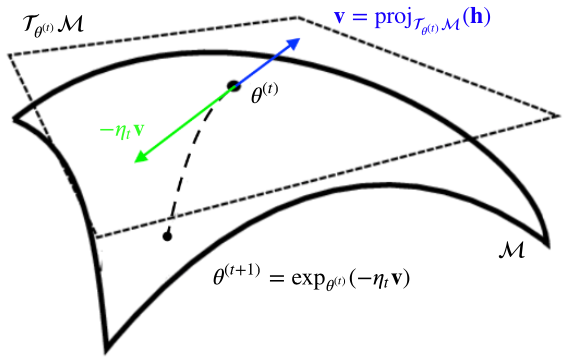 Another equivalent way of seeing the gradient update is the following: The mapping which moves the point $\vtheta^{(t)}\in\cM$ in the initial direction $-\vv$ along a geodesic of length $\norm{\eta_t\vv}_{\vtheta^{(t)}}$ is exactly the exponential map $\exp_{\vtheta^{(t)}}(\argdot)$.

Sometimes, as mentioned by Bonnabel in [2], for computational efficiency reasons or when it’s hard to solve the differential equations to obtain the exponential map, the gradient step is also approximated through the retraction $\cR_{\vx}(\vv)$: 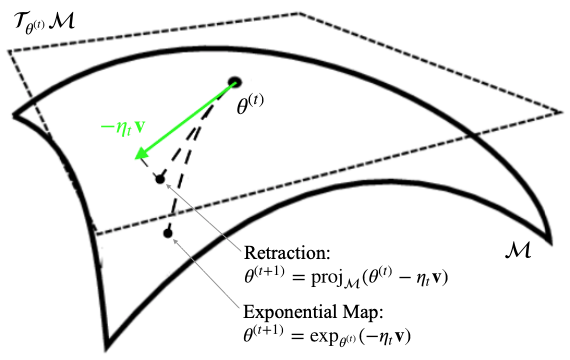 As one can see the retraction first follows a straight line in the tangent space and then orthogonally projects the point in the tangent space onto the manifold. The exponential map instead performs exact updates along to the manifold’s curved geodesics with a geodesic length that corresponds to the tangent space norm of the tangent vector $-\eta_t\vv$. Therefore, the different update methods may lead to different parameter updates. Which one is better to use depends on the specific manifold, the computational cost of the exponential map, the size of the gradient-steps and the behaviour of the loss function.

To summarize, all we need to perform RSGD is 1) the inverse of the metric tensor, 2) the formula for the orthogonal projection onto tangent spaces, and 3) the exponential map or the retraction to map tangent vectors to corresponding points on the manifold. The formulas for the steps 1)-3) vary from manifold to manifold and can usually be found in papers or other online resources. Here are few resources, that give the concrete formulas for some useful manifolds:

Furthermore, let the optimization problem on $\cP$ be

Then, the nice thing with product spaces is that the exponential map in the product space $\cP$ simply decomposes into the concatenation of the exponential maps of the individual factors $\cM_i$. Similarly, the orthogonal projection and the gradient computations also decompose into the corresponding individual operations on the product’s factors. Hence, RSGD on products of Riemannian manifolds is simply achieved by performing the aforementioned gradient-step procedure separately for each of the manifold’s factors. A concrete algorithm for product spaces is given in the algorithm below:

We’ll use the Riemannian ADAM (RADAM) in the code-example that follows in order to see how to perform Riemannian optimization in product spaces with geoopt.

Here’s a simple code example that shows how to perform Riemannian optimization in a product space. In this example, we’ll optimize the embedding of a graph $G$ that is a cycle of $n=20$ nodes such that their original graph-distances $d_G(x_i,x_j)$ are preserved as well as possible in the geodesic distances $d_{\cP}(x_i,x_j)$ of the arrangement of the embeddings in the product space $\cP$. The product space that we’ll choose in our example is a torus (product of two circles). And the loss that we’ll optimize is just the squared loss of the graph and product space distances:

The following plot shows how the positions of the embeddings evolve over time and finally arrange in a setting that approximates the original graph distances of the cycle graph.

Here’s the code that shows how the optimization of this graph embedding is performed:

Of course, one might choose better geometries to embed a cycle graph. Also, a better embedding could have been achieved if the embeddings had wrapped around the curved tube of the torus. This example was mostly chosen to have an illustrative minimal working example in order to get you started Riemannian optimization in product spaces. A paper that extensively studies the suitability of products of spaces of constant curvature to learn distance-preserving embeddings of real-world graphs is the work of Gu et al. [4].

That’s all for now, I hope that my motivation and explanation of RSGD was helpful to you and that you are now ready to get started with Riemannian optimization.