A Universal Model for Hyperbolic, Euclidean and Spherical Geometries

Posted by Andreas Bloch in collaboration with Ondrej Skopek and Gregor Bachmann under the assistance of Octavian Ganea and Gary Bécigneul on November 21, 2019

The Euclidean space is the default choice for representations in many of today’s machine learning tasks. Recent advances have also shown how a variety of tasks can further benefit from representations in (products of) spaces of constant curvature. The paper by Gu et al. [1] presents an approach that estimates and commits to the curvature of spaces in advance and then learns embeddings the chosen (products of) spaces of constant curvature.

In this blogpost we present a geometric model, called the $\kappa$-Stereographic Model, that harnesses the formalism of gyrovector spaces in order to capture all three geometries of constant curvature (hyperbolic, Euclidean and spherical) at once. Furthermore, the presented model also allows to smoothly interpolate between the geometries of constant curvature and thus provides a way to learn the curvature of spaces jointly with the embeddings.

The $\kappa$-stereographic model has been elaborated within the scope of the B.Sc. and M.Sc. theses of Andreas Bloch, Gregor Bachmann and Ondrej Skopek at the Data Analytics Lab of the ETH Zürich under the assistance of Octavian Ganea and Gary Bécigneul. All of the theses were related to learning representations in products of spaces of constant curvature. Two papers that apply the $\kappa$-stereographic model are:

Models for Spherical and Hyperbolic Geometries 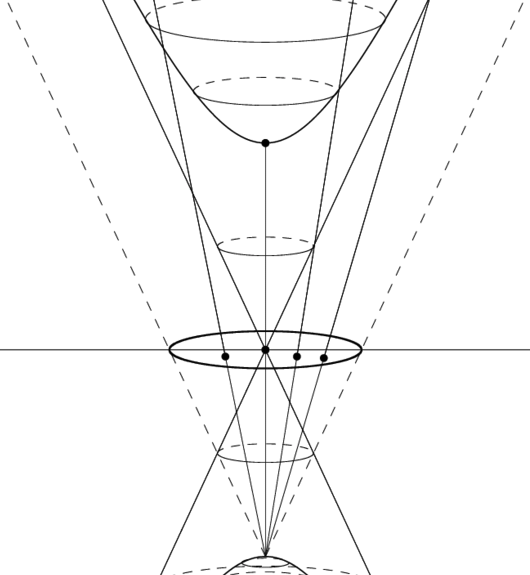 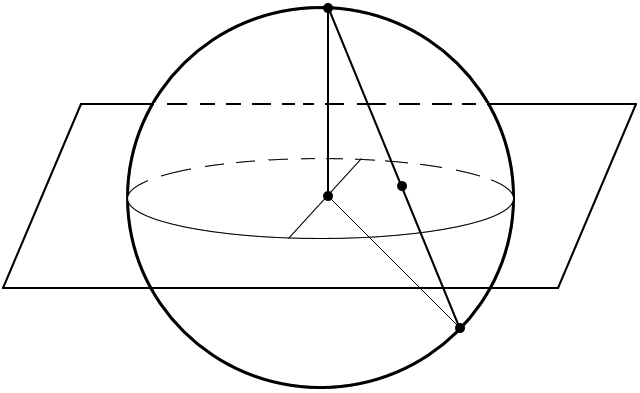 In this blogpost we show how the duality of the Poincaré ball and the stereographic projection of the sphere can be captured within Ungar’s formalism of gyrovector spaces [5]. The reason that the stereographic projections were chosen in the model that will be presented in what follows is that they allow to smoothly interpolate between spaces of positive and spaces of negative curvature – this can be very useful to learn the curvatures of factors of product spaces used to train embeddings, but more on that in a future blogpost on curvature learning in product spaces. For now, we just want to familiarize ourselves with gyrovector spaces and our concrete instantiation of a gyrovector space: the $\kappa$-stereographic model for spherical, Euclidean and hyperbolic geometries.

In what follows we present the most important definitions that give rise to gyrovector spaces. The definitions presented here are taken from Ungar’s work [8], where the algebra’s axioms and and some of its deriveable properties are introduced jointly for convenience. For a presentation that restricts the definitions to a minimal set of axioms and then separately derivates the resulting properties the interested reader is referred to Ungar’s other work [5].

Now, we define a gyrogroup, which is an essential component of a gyrovector space.

From the definition of above, one can easily verify that $(-1)\otimes\va=\ominus\va$, and $\norm{\ominus\va}=\norm{\va}$. One should also note that the ambiguous use of $\oplus$ and $\otimes$ as interrelated operations in the gyrovector space $(G,\oplus,\otimes)$ and its associated one-dimensional “vector” space $(\norm{G},\oplus,\otimes)$ should not raise any confusion, since the sets in which these operations operate are always clear from the context. E.g., in vector spaces we also use the same notation, $+$, for the addition operation between vectors and between their magnitudes, and the same notation for the scalar multiplication between two scalars and between a scalar and a vector.

Next, we’ll look at how we can use the algebraic structure of a gyrovector space to implement one universal model, able to capture hyperbolic, spherical and Euclidean geometries.

The $\kappa$-Stereographic Model for Hyperbolic, Spherical and Euclidean Geometry

In their paper about “Hyperbolic neural networks” [7], Ganea et al. already showed how one can harness the gyrovector space formalism presented by Ungar in [5] to implement all the necessary tools for deep neural networks that operate on hyperbolic representations. Later, throughout the development of our theses related to curvature-learning, we discovered and verified that one can use the same gyrovector space formalism also with positive sectional curvature in order to also implement all of the necessary operations for the model of the stereographic projection of the sphere.

For some $n$-dimensional manifold with constant sectional curvature $\kappa\in\R$, we can instantiate a corresponding gyrovector space algebra $(\cM_\kappa^n,\oplus_\kappa,\otimes_\kappa)$, to intuitively express and compute important operations on the manifold in closed form. The concrete definitions of the carrier set and operations for the gyrovector space algebra $(\cM_\kappa^n,\oplus_\kappa,\otimes_\kappa)$ are given in what follows.

One may easily verify that the carrier set $\cM_\kappa^n$ simplifies to the entire $\R^n$ for spherical and Euclidean geometries and to the open ball of radius $R=1/\sqrt{-\kappa}$ for hyperbolic geometries. Thus, another way to express $\cM_\kappa^n$ is:

For the addition in our gyrovector space algebra we use the plain-vanilla Möbius addition:

An important property of the Möbius addition is that it recovers the Euclidean vector space addition when $\kappa\to 0$:

Having defined the Möbius addition, the Möbius subtraction is then simply defined as:

For $\kappa\leq 0$ it has been shown that $(\cM_\kappa^n,\oplus_\kappa)$ forms a commutative gyrogroup, where additive inverses are simply given as $\ominus \vx=-\vx$ [8]. Furthermore, one can easily verify that for $\kappa=0$ the gyration becomes trivial, making the algebra $(\cM_0^n,\oplus_0)$ simply a commutative group. However, it turns out that for $\kappa>0$ there are exceptions where the Möbius addition is indefinite:

The theorem can be proven using the Cauchy-Schwarz inequality. Now, what this means is that for positive curvature $\kappa>0$, we have the situation that for every point $\vx$, $\vx\neq \vzero$, there exists exactly one other collinear point

However, since for every point $\vx$, $\vx\neq \vzero$, there is only exactly one other point out of the many other possible points in $\cM_\kappa^n$, for which the Möbius addition is indefinite, this is not too much of an issue for practical applications. One may circumvent these rare cases of indefinite Möbius additions by fixing them through min-clamping the denominator to a small numerical value $\epsilon>0$. This way, the Möbius addition can be extended with desirable approximation behaviour in these indefinite cases.

Before defining the scalar multiplication we first want to introduce the following trigonometric functions that are parametrized by the sectional curvature $\kappa$. These trigonometric functions will help us to unify and simplify the notations for spherical and hyperbolic geometry within the elegant formalism of gyrovector spaces.

If one ignores the definitions of the upper functions for the cases where $\kappa=0$, one may verify that for any $f_\kappa\in\set{\tan_\kappa,\arctan_\kappa,\arcsin_\kappa}$ the identity map is approached as $\kappa\to 0$:

This is exactly the motivation behind the definitions of the cases where $\kappa=0$. Also, these limits will become useful later when we’ll show how the $\kappa$-stereographic model approaches an Euclidean geometry for $\kappa\to 0$.

Having defined these curvature-dependent trigonometric functions we can now use them to define an augmented version of the Möbius scalar multiplication as follows:

However, this indefiniteness is not too tragic. One may redefine the augmented scalar multiplication for an indefinite case $\alpha\otimes_k\vx$ recursively as

giving an augmented gyrovector scalar multiplication that is definite for all real scalars.

Recovery of Euclidean Geometry as $\kappa\to 0$

The following formulas show how in the limit $\kappa\to\ 0$ an Euclidean geometry, with a Cartesian coordinate system at intervals of $2$ units, is recovered:

The formulas for the Euclidean geometry have a “2” or a “4” here and there which comes from the fact that the points $\vx,\vy$ are in the basis of a Cartesian coordinate system with intervals of size 2. This coordinate system just emerges in the limit $\kappa\to 0$ from the Poincaré ball and also from the stereographic projection of the sphere, which both can be seen as a coordinate systems for a corresponding hyperbolic and spherical geometry, respectively.

A few things to note in the formulas of above are: that the exponential- and the logmap are simply given through vector addition and subtraction. Also, the distance is simply upscaled by a factor of 2 due to the choice of coordinates. The weighted midpoint simply becomes the familiar weighted average.

Grids of Geodesics at Equidistant Intervals

Now that we’ve entirely described the models mathematically, let’s also build up our intuitions through some illustrations of the geometries in 2D. First, we want to see how a grid of equidistant geodesics in two orthogonal directions looks like in the geometries of constant curvature.

Grid of Geodesics on Euclidean Manifold

Here’s how a grid of geodesics looks like on the $x/y$-plane, a.k.a. the 2D Euclidean manifold. Actually, that’s nothing special, the grid just consists of straight lines, reminding us of the Cartesian coordinate system. Note that this 2D grid could be a cross-section of a 3D Euclidean geometry.

Grid of Geodesics at Equidistant Intervals
on Euclidean Manifold
($\kappa=0$)

Grid of Geodesics on Poincaré Ball

Now, let’s get a feeling of how a grid of geodesics at equidistant intervals on the $x/y$-axes looks like on the Poincaré disk:

Grid of Geodesics at Equidistant Intervals
on Poincaré Ball
($\kappa=-1$)

One can also imagine how a 3D hyperbolic geometry looks like if one imagines that this 2D grid of geodesics is the cross-section of the inside of a 3D Poincaré ball.

Grid of Geodesics on Stereographic Projection of Sphere

Here’s how the equivalent grid of geodesics looks like for the stereographic projection of the 2D sphere:

Some things to note in this grid are:

Illustrations of Smooth Interpolations between Geometries of Positive and Negative Curvature

In the following we want to illustrate how the $\kappa$-stereographic model allows to compute useful notions for the manifolds of constant curvature and how these notions smoothly interpolate for changes of the curvature $\kappa$.

The following animation shows how the parallel transport of unit gyrovectors smoothly adapts to changing values of the curvature $\kappa$:

Observe how for positive curvature the midpoint moves to the northern hemisphere once that the embeddings of $\vx_1,\ldots,\vx_4$ also start to reside there.

The following animation shows how the scalar field of distances to a point $\vx$ smoothly transforms for various curvatures. One thing to note here is how for spherical geometries with a large curvature the maximal representable distance becomes very small due to the spherical structure of the manifold. Another thing to notice for negative curvature is that most of the space resides at the border of the Poincaré ball - thus it is crucial to work with float64 in order to represent distances accurately.

The following animation shows how the scalar field of distances to a hyperplane smoothly transforms for various curvatures. The hyperplane is described by a a point $\vp$ on the hyperplane and a normal vector $\vw$. Note how the hyperplane just becomes a straight line for $\kappa\to 0$ and a great-cricle for $\kappa>0$:

Note that the implementation doesn’t support the Euclidean geometry for $\kappa=0$. Instead only the cases $\abs{\kappa}>0.001$ are supported, such that the formulas of above always provide gradients for $\kappa$ in order to be able to learn the curvatures of embedding spaces.

Here’s a quick code example that shows how the $\kappa$-stereographic model can be instantiated and used to perform some of the aforementioned operations. The code example also shows how to train the curvature $\kappa$ to achieve certain targets.